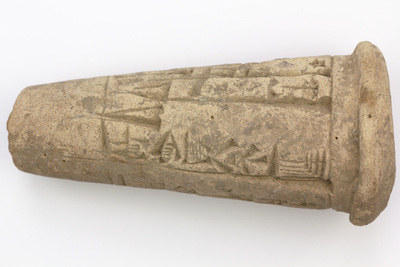 Most Mesopotamian buildings were made of sun-dried mud brick. In early dynastic times it was common to decorate the walls of temples with clay nails that could become a range of colours after firing.   From 2400 BC to 1700 BC inscribed nails were driven into temple and tomb walls, sometimes briefly and pompously stating the name of the ruler who built the temple or the deceased in the tomb. Only the Gods could read the message as it was enclosed in the wall.  This was but one means of articulating ownership or achievements.

The sides of the cone have eight lines of cuneiform. The end of the cone has been broken off. This was found at Girsu (modern Tello).    The cone refers to Gudea, ruler of Lagash from 2141-2122 BC, who built the temple at Girsu to the god Ningishzida: ‘To Ningishzida, his god, Gudea, ruler of Lagash, man of Gatumdug, he built for him the temple in Girsu.’

For grand buildings and proud kings, a clay or wood stamp could be made that impressed an appropriate boastful message into each brick before drying.  Here is such a brick from a wall in Babylon built by Nebuchadnezzar II (604-562 BC).